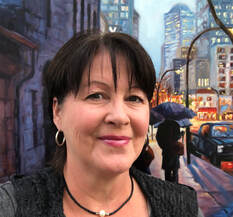 Biograph Debbie was born in North Vancouver British Columbia in 1960. She Graduated from Carson  Graham with an Arts Scholarship. She is a self-taught artist that has followed her childhood dream, to be an 'Artist'. For the past 20 years she has mastered watercolour and acrylics but now works primarily in oils.
I am captivated by the process of rendering light and shadow, no matter what the subject. Light warms, reveals and brings joy to paintings. I'm passionate about the whole process of creating a painting, from the challenge of design to the manipulation of paint. My subject matter varies however I seem to be drawn to some sort of story element and intimacy in my paintings. My main desire is to capture what has spoken to me and share it with my viewers!
Along with working in my studio I love Plein Air Painting. The colors, reflections, shadows etc. are seductive in nature.

The best way for me to expel some of this passion inside is to share it with students. I find su and joy passing on the skills I have learned over the years from others. To my students, "Thanks for letting me share and getting to know you!"
View workshops and classes.